I would prefer to grow my veggies by seeds.  It is cheaper, we can grow more varieties than what we might find locally, and it would enable us to start with heirloom seed instead of the hybrids that are available at the local nursery.

However, I’ve not ever had much success with starting plants by seeds.  Years ago we set up a table with a hot light.  They grew but they were spindly.  Since then we’ve not had a place to dedicate to seeds.  I did grow some nice bean plants last year from seed, but usually we have just purchased plants when it was time to set out the garden.

But this year, I thought I would try again.  We purchased a lot of heirloom seeds by mail order last fall.  I looked up my local extension office to find planting instructions for each.  I even had honeyman build me a very nice cold frame.   I was all set to plant my seeds.

We can plant most summer crops around 4/15 here in central NC.  So I counted back 8 weeks and started the seeds around mid-February and put them in the cold frame.

This is my first time using a cold frame so I wasn’t up on all the rules.  For instance, I didn’t know that when it was sunny and 50 degrees outside that you needed to open the windows and vent it.  When I finally figured that part out, I realized that sunny and 50 degrees outside meant 90-100 degrees inside the cold frame!  Who knew the windows would make it that much hotter when the sun shines in.  In addition, I wasn’t aware that the pots would dry out faster and require more watering.  Well, maybe I could have figured that out, but with working 12-14 hours days at the time, there were many days I didn’t get outside to check on them.  So, three weeks after planting, there was nothing.  It was like a barren desert.

So, I replanted.  And this time I followed the rules.  I watered them more often and I vented the windows.  Jump ahead two weeks… well, I guess you can’t call it nothing, but it’s close enough.  The collards are up and there a couple of little sprouts of herbs. 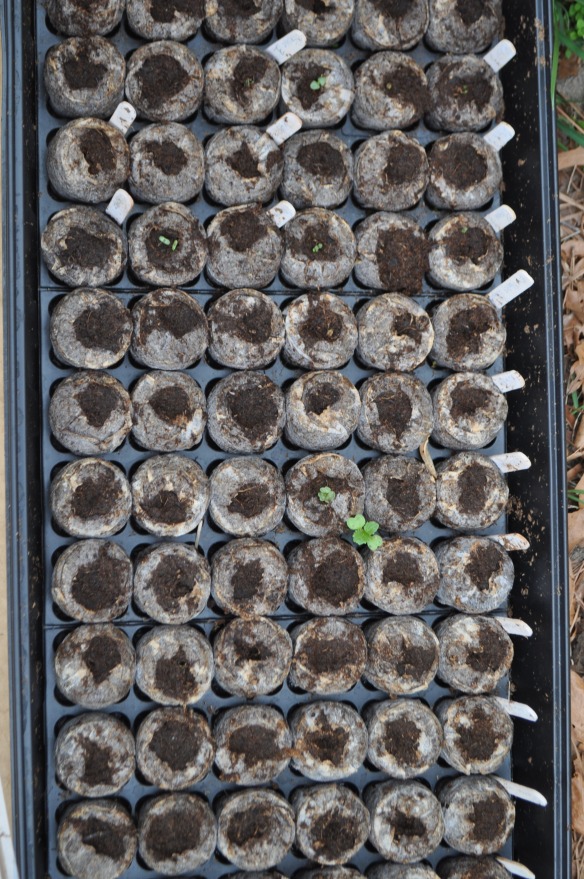 By the next morning, 99% of the seed had sunk to the bottom.  So that means the seeds are good right?  So I planted the seeds that had been soaking all night.  I thought having soaked in water all night would give them a head start and they should sprout even faster.    I had put more in each cup than I thought I needed because I didn’t expect 99% of them to be good.  Therefore, I ended up with more pots than I had originally planted due to the fact that I had extra seeds soaked.  I certainly didn’t want to waste them.

Back in the cold frame they went, well watered this time.

This was 6 days ago… I have one new sprout.  Just one!

I haven’t completely given up hope on the seeds, but since planting time is just 3-4 weeks away I’m beginning to wonder if I should put money aside in the budget to buy some plants.

Planning a garden during the cold winter nights is always fun.  Dreaming of juicy red tomatoes, sweet cucumbers, spicy peppers… playing in the dirt, smell of the fresh air.  Ahhh,.. This afternoon, I went out and started getting some of the area ready.  It was about 45 degrees outside, and it was invigorating.

According to the NC Extension office I can now plant onions, peas, cabbage, radishes, and turnips.  And in 2 weeks I can plant potatoes, spinach, lettuce, and carrots.  So planting time isn’t just quickly approaching — it’s already here.  I planted some cabbage and turnips today.  And I have the area ready for the peas — just need to get some seeds.

Some years I plant big gardens, some years are small.  I normally do just a summer garden.  I typically plant and have good success with tomatoes, cucumbers, green beans, peppers, and lettuce.

This year, I will have a new fertilizer source — rabbit poop.  So, I’m expecting everything to grow better.  Also, I would like to extend it into a year-round garden — or at least a spring, summer, and fall garden so I am planning a bigger than normal garden.  In fact, I’m not sure my garden space is big enough for everything I want to plant.  I have two spaces – one is 3′ x 56′, the other is 16′ x 32′.  So total, I have just under 700 square feet, and I need to plant enough to feed a family of 7, plus extras to freeze or can.

Here is what I would like to plant in no particular order.  The list is long and keeps growing.    And of course, I want to plant more than one variety of tomatoes, cucumbers, peppers, etc.  It reminds me of going to a buffet for dinner — a little bit of this, and little bit of that, and pretty soon you have a plate full with twice as much as you can eat — or in this case, twice as much as I can probably care for.  I’m also trying to determine what kind of crop rotation I can do in order to fit more growing season into the space that I have.  Many of these are cool weather crops which I think will grow well in the 3′ x 56′ space that I have since it is beside a fence that blocks the afternoon sun.  If you have some ideas, I’d love to hear them! 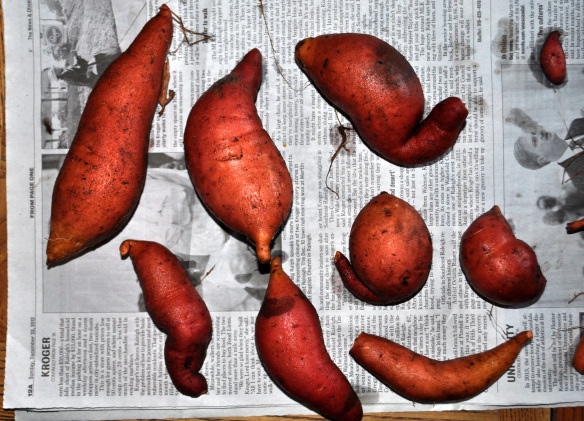