Believe it or not, I have never made a sampler quilt. The Goose Tracks quilt I made several years ago by HoopSisters is probably the closest I have come.

I always thought a sampler quilt would be a good option for building skills in various types of quilting.  So when Pat Sloan and  Jane Davidson announced the Splendid Sampler earlier this year, I decided to give it a whirl.  The Splendid Sampler is a 100-block sampler quilt with 6″ blocks that are traditionally pieced, paper-pieced, appliqued, and hand-stitched. And we have a whole year to make these 100 blocks.  Piece of cake.  After all, what’s one more project?

Of the sampler quilts that I have admired over the years, I really like those with a variety of colors best.  For the first several months of this adventure, we had not yet sold the old house, purchase a new house, or moved, so my stash was still in storage 5-hours away.  So some wonderful ladies I met on the internet sent some fabric my way so I could get started.   I am so thankful to them.  To that, I was able to add a few scraps I had laying around, and ended up with a good mixture of pinks, peaches, blues, and greens.

I sorted everything into light, medium, and dark values so it would be easier to pick fabrics for each block.

And the adventure began.  Blocks are released twice a week.

Here are my first 12 blocks 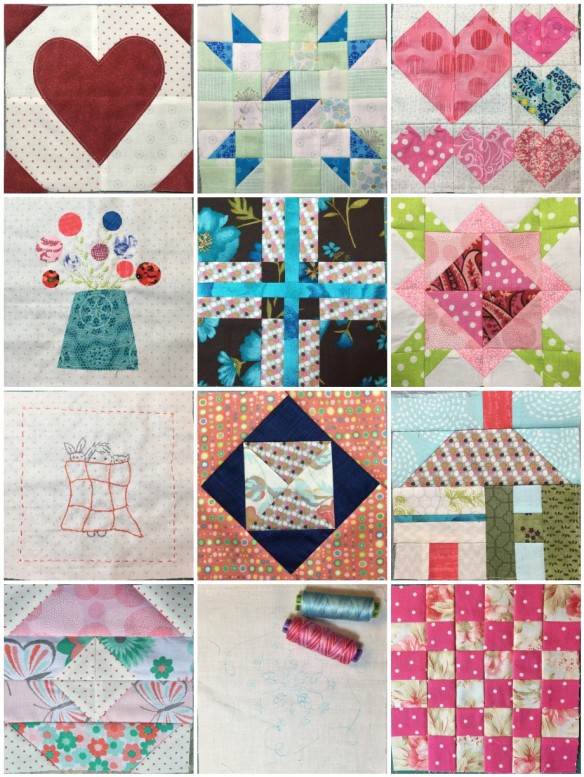 I was able to stay on top of it until mid-April when we moved.  And then I got behind.  And as you can see, I haven’t done block 11.  I’m not a huge fan of hand embroidery  It’s beautiful and I greatly admire it.  I just don’t want to do it.  So any hand-stitched blocks may take me a bit longer.  I really should do block 11.  It is titled ‘Crocheted Thoughts’, and since I also crochet it would be good to include it in my quilt.  In fact, I have actually thought about crocheting it, rather than embroidering it.

They are also releasing ‘bonus’ blocks as we go along.  Here is the first bonus block.  This may just become my block 11. 🙂  We shall see.

I have a few more blocks finished, but not another dozen yet.  I plan to work on them more this weekend, so hopefully I will have another set to share with you shortly.  I think they have released block  60, so I fallen behind more than I would like.

Are you participating in the Splendid Sampler?  If so, have you been able to stay current with this project?  Oh, I had grand plans in the beginning, and then life got in the way.  Isn’t that how it always is?

Linking up with Finish it Friday at Crazy Mom Quilts and  Can I Get a Whoop Whoop at Confessions of a Fabric Addict.