I am excited to announce that we have kits.  They were born about 2 1/2 hours ago.  I’m not exactly sure how many she had.  At least 8, maybe 10.  Our first litter about 3 weeks ago died from the cold.  So we moved this mama inside where it was warmer.

She has been nesting for a week and I was really beginning to wonder.  Last Monday she made a nest, then by Thursday she had messed it all up and eaten a lot of the hay.  Then this past Friday she started pulling hair and rebuilt the nest.  Then by yesterday she had messed it all up again.  I didn’t know what was going on.  Is she going to have babies or not?  I watched her belly last night and saw some kicking so I was pretty sure we were having babies.  But when?  She’s been nesting off and on for over a week.  In fact, I was going to post something this morning about these strange habits and how I can’t figure it out. But I got up late this morning, and had to hurry to get to work on time so I didn’t get around to it.

I worked from home today and I checked on her at lunch time.  She was pulling out hair like there was no tomorrow.  There was hair everywhere.  She was breathing real heavy, and looked generally uncomfortable.  Today then??  Maybe…

Then around 5pm, honeyman came up stairs and told me there were babies.  So far, they have lived longer than our first litter, so I feel the need to check on them often.  There are 6 or so in a group all huddled up together, but then there are another 2-4 in other parts of the nesting box covered up with hay and mama’s hair.  Should I worry about those?  Should I move them so that they are all in the same huddle?  Should I just leave them alone?  I don’t know…  I don’t want to mess with them if I don’t need to, but I don’t want them to die either.   Looks like we have a good mixture of color here though — some dark, some white, and some black/white like their mother.

The expectancy surrounding this for the past couple of days reminds me of when I was pregnant and anxiously awaiting the baby to arrive.  Whew!  Now if they can just live till tomorrow, I will feel a little more comfortable. 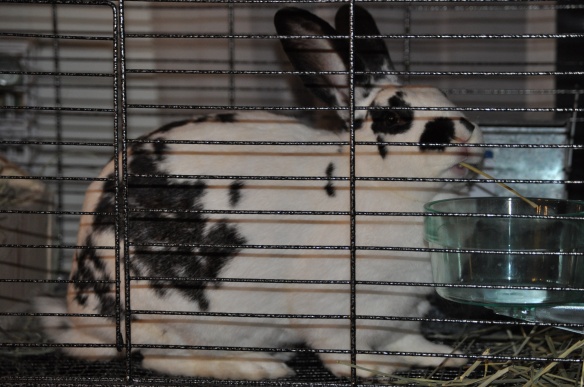